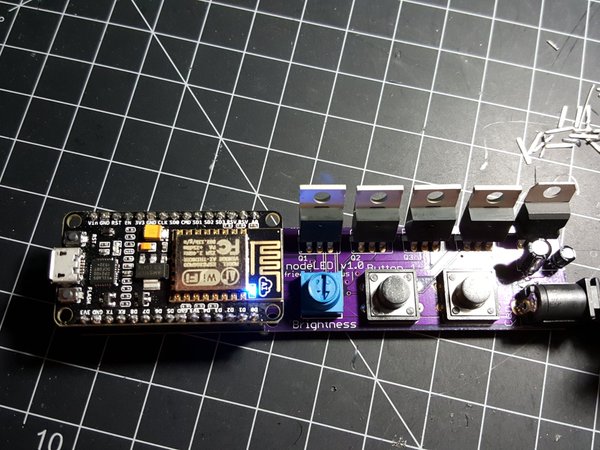 As a hacker, I know all too well how much workbench space is vital. Alongside my three monitors, I have an extended desk that houses my soldering irons, compartment shelving, and countless projects, among other tools and devices. One constant that seems to get in my way is an old desk lamp. That’s where this project came to light, ha! I decided to design my own lamp using an analog RGBW LED strip. This board I designed will give you the tools to design your own WiFi controlled light source.

The boards’ controller is run by the NodeMCU which is connected to an N-Channel MOSFET for each color of the RGBW LED strip. Trimpot for brightness and two user buttons (that can be setup to change modes, possibly) were also added. A 5v regulator was then added so the power can be shared with 9-12v input for the LED strip. The nodeMCU will be updated by wireless as well.

My idea is to have the nodeMCU be a web server for direct control via a web page. The site will have various configurations including color options, number of channels, animations (like fade effects) and a timer. I’d like to have it connect to MQTT server to integrate with larger servers such as openHAB.

You can follow the details of the project on Hackaday.io