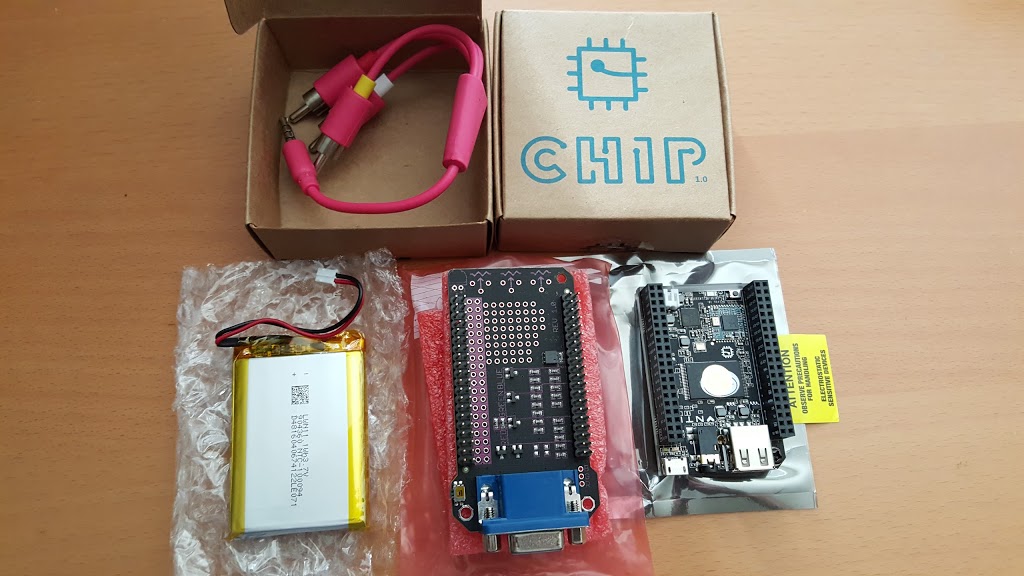 After a year of waiting it has arrived: the $9 computer from Next Thing Co. When it launched on Kickstarter, there was no reason to skip backing this one to at least see what it was all about. Now that it has arrived I am quite happy that I did. For such a large project it would hardly be worth calling it late. My reward was due May 2016 and I received it June 2016. Very good compared to most crowd sourcing campaigns. I selected the C.H.I.P. plus battery reward, but before it shipped you could add accessories. I added the VGA adapter and an extra C.H.I.P. That way I can use it on my desk attached to my monitor since the DVI input is already in use. With the Raspberry Pi I have to connect it to the TV if I want to mess with it directly. At this price it’s cheap enough to buy more than one that you can dedicate to a project and just fuggedaboutit.

For those of you who don’t know what it is, you could say it’s a strip down Raspberry Pi, but more like the BeagleBone Black. It is powered by the R8 AllWinner CPU running at 1Ghz with 512MB of RAM. The big difference, which is what makes it more like the BBB, is the 4GB of on board storage. This makes it a snap to get going without having to buy an SD card, making it even cheaper. In the case of the RPi it really does end up costing much more than the $35 by the time you are done. The C.H.I.P even has a plastic cover on the bottom, which was included for backers. They also offer the PocketC.H.I.P. which adds an LCD and keyboard. I’ll have to get my hands on one of those eventually and do a review… hint hint Next Thing Co.

The out of the box experience is pretty good. It comes preloaded with Debian but to update it all you have to do is plug it in via micro USB, visit http://flash.getchip.com/ (with Chrome to install the Chrome app) and follow the directions. As you can tell from the site they just added DIP support which is needed for the VGA and HDMI add-ons. If you purchased those you will have to update it out of the box. It may be the case by the time regular orders ship it will be updated already.

It took a bit of fiddling with it to get the latest version flashed. I kept getting failed flashes with waiting for fastboot and other various issues. Finally I did 4.3 and then 4.4 and it took but this was using my laptop as I wasn’t having much luck on my desktop. They have a pretty good support site and community so if you run to any problems there are plenty of people ready to help you.

Once running, I was having a power problem as the onboard power management chip doesn’t allow much over 500mA to be drawn from the USB port to safeguard the host. At least there is a way to override this in software. It isn’t an issue until you add the VGA/HDMI or a USB device. What worked better was to use a USB battery pack and not plug in the USB dongle for my mouse/keyboard until it booted and loaded the desktop. But eventually it cut power once I connected to the internet and ran updates. Good thing I purchased the battery since it acts like a UPS and fills in when needed. I think the 500mA cut off is unnecessary. Most computers protect themselves and in my case, my computer can easily supply more than 500mA. Plus you could use a USB hub to supply more power as well. I have a Gigabyte Motherboard that allows extra power on the USB ports for charging and such. I know from experience that the ports are protected…

At this point I don’t have a project lined up for it. For now it will be messing around and maybe running a web server. To be worth while it would have to be a hardware or portable project as I have said before, instead of another device being powered around the house I can always just create a Virtual Machine with Linux. Overall its a great little device that I can see being used in lots of projects as more people get their hands on it, especially at this price point and size.