After some time of resisting, I have finally succumbed to my first blog. For a while I had resisted some of the online services such as Twitter, Facebook, and blogging. Most of them were created out of necessity to access something or follow something for an event. The same happened for this blog. I have always been into projects at home and more recently have wanted to share them with friends, so my GF, suggested I created a blog. I had thought of other ways like Facebook or my own site as I am the DIY yourself type and rather create/host my own stuff. Problem is exposure and uptime. So I decided to go with the blog option.

A few years ago a friend had introduced me to the MAKER Fair and in turn MAKE magazine, which opened me up to a whole new world of creative chaos. So many ideas and projects I wanted to get my hands on and try, it was quite overwhelming. I love new tech projects and challenges so I knew I had to do something. I had seen the Arduino micro controller but didn’t think much of it at the time and didn’t really understand/see the possibilities. Recently I had repaired an Xbox 360 controller and realized it wasn’t as too difficult to solder a PCB. This lead to repairing or rather, attempting to repair a Dell LCD screen (which I thought I had fixed but the problem returned).

Some time passed and the urge became too great – I just needed to get my hands on some more soldering projects. After some research and talking to a few friends of my mine that are EE’s, I caved in and went to Fry’s Electronics store to purchase 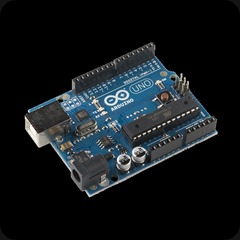 an Arduino Projects Pack. There isn’t a Fry’s nearby to me, but it just so happened that I needed to RMA some RAM, so in the mean time I needed a replacement. This gave me more of a reason to make the journey to Fry’s worth while versus buying online and waiting for shipment. Of course in my mind I wanted to make the trip as worthwhile as possible even though it involved spending more unearned money, so while I was there, I bought a Logitech G700 wireless mouse as well.

The following day I couldn’t wait any more, I set aside some time to tear open the projects pack and have at it. Quickly, I was able to do the “Hello World” and create a blinking LED. Even though this was a simple task, to my amazement I was in awe that I could make an LED blink with code! At that moment my brain exploded with ideas and possibilities. From that moment on I became addicted, almost like a new drug.

A few years ago I had always wanted to make a WiFi controlled R/C car. I had seen one made on the internet using a VIA C3 motherboard with a robot controller board. The cost had always kept me from pursuing this project. Then it came to me, I could use the Arduino and do it on a smaller scale with a lot less money. Ever since, it has become my obsession. The deeper I get, the explosion of ideas just gets larger and uncontrollable. I hope this blog will give me a chance to document my progress, share my projects with others out there that are interested and inspire others. I have found that a lot of my research takes me to other blogs which has been very helpful. I hope I can do the same for others.